We think our dogs belong to us, but sometimes they have greater masters—a tennis ball, a bit of steak, or an unseen spirit that lures them away just when we call their name. After visiting Pompeii, I’m convinced that it’s also possible for a dog to belong to a place.

The Dogs of Pompeii

For my fiftieth birthday,  (not recently),  I decided to visit that ancient city, in part to see something old and well-preserved—a role model, of sorts. It was February, and the weather in Italy was unseasonably cold; there had even been snow in Rome. When my wife and I stepped off the bus in Pompeii the wind was gusting off the Bay of Naples. Normally, the rain showers would have driven us inside a coffee bar, but history beckoned. Besides, the weather gave the abandoned city a dark cast that just enhanced the mood of a place suffocated by nature.

What is now an archeological site and tourist mecca was once a city of twenty thousand people and a sizable population of dogs. On an August day in 79 AD, Mt. Vesuvius exploded, burying Pompeii and neighboring towns. Life stopped instantly, and was preserved under twenty feet or more of mud and volcanic ash. Now, nearly two millennia later, archeologists are still finding buildings, natural casts of bodies, and even well-preserved food.

Pompeii exceeded our expectations, with dozens of the little surprises that make travel so much fun. I was particularly intrigued by a large floor mosaic in the entryway of a residence called the House of the Tragic Poet, so-named for its frescoes of scenes from the Iliad. The floor mosaic depicts a fierce-looking dog, with words beneath reading, “Cave Canem,” or “Beware of the Dog.”   The mosaic depicts a crouching, fierce dog, teeth bared as if ready to rip into whoever might step over the threshold. (Perhaps before the Tragic Poet tried to enter the house, he was just “The Poet.”)

The dog depicted is a Molossian. They are a breed that was once used in Greece and Rome for guarding flocks and homes. They’re related to today’s  mastiffs, but because of uneven breeding practices, they took on forms ranging from mastiffs to stocky labs to lanky bulldogs. Some had feathery fur, like today’s Golden retrievers, and some were short-haired. The poet Virgil wrote, “Never, with them on guard, need you fear for your stalls a midnight thief, or onslaught of wolves, or Iberian brigands at your neck.”

A few similar mosaics have been found in other early homes, showing how seriously the citizens took their canine protectors. The permanence of the tile indicates that the owners planned to keep replacing dogs once old age made them incapable of striking fear into the hearts of brigands, wolves, and thieves. A protection dog was literally part of their home.

To me, that mosaic imparted a sense of life that the detailed frescoes on the walls could not. For one thing, the creature depicted wasn’t from a Greek or Roman myth; it represented a dog that had once paced that very floor, barked at people passing by on the street, or took a treat from the hand of a familiar visitor. It wasn’t difficult to imagine her barking, the sound echoing off the tile floors and stone walls. Even two millennia later, that dog and the space she’d once protected demanded respect. On the other hand, she must have had plenty of tail-wagging moments with her family; maybe there had been children throwing sticks for her in that very hallway.

After the ash settled over the town, trapping everything from kitchen utensils to live beings, casts were formed around cavities where the bodies or household objects had decomposed, leaving behind only the shapes. There are numerous human casts in the warehouses of Pompeii and the archaeological museum in Naples. In addition to the people, there’s a disturbing cast of a dog in his last moments of life. The creature is wearing a collar, proof that he once had a home and a name. 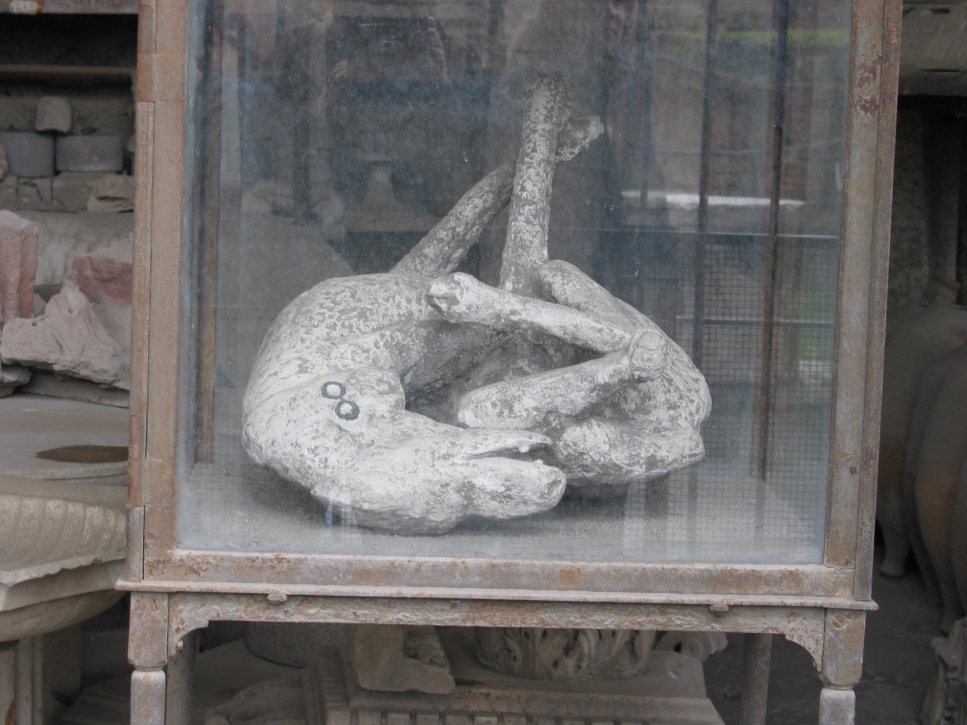 This dirty glass case sat in a storage building amid other archaeological finds, as if a curator didn't know what else to do with it. The cast provides a stark contrast to the fierce guard dog in the House of the Tragic Poet: one, an aggressive protector, the other, a creature suffering through its last moments of ultimate vulnerability. How quickly the fearless become the fearful.

Given the speed at which Vesuvius buried Pompeii, the dog wouldn't have suffered long. It is frustrating to know that it’s impossible to reach back into time and comfort him, but it’s inspiring to know people are helping his descendants. This little fellow is a good example: 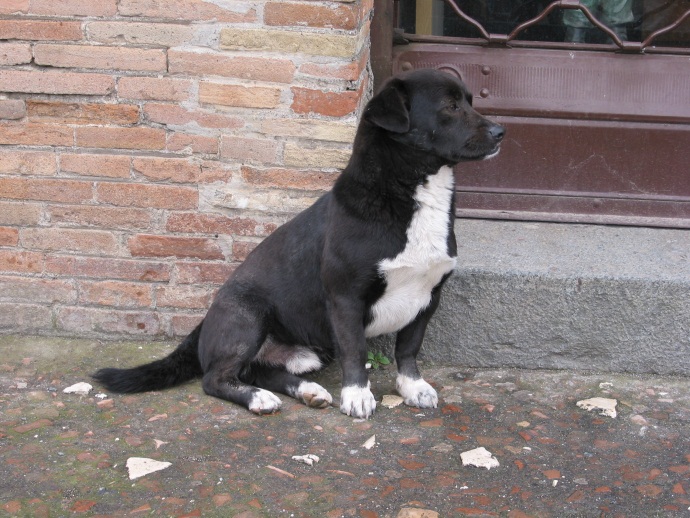 He was just hanging out, watching people stride past, his bearing one of sophistication and confidence. His coat was clean and thick, he looked as if he hadn't missed very many meals, and if given a chance to speak, I’m guessing he’d say he was very pleased with life in Pompeii.

His good health was due in great part to the dog culture that has developed in Pompeii. There are dozens of stray dogs living in the ruins. Most are aloof but not aggressive, and many look as satisfied with life as this one. They do well because, even as strays, they’re well-cared for. Tour guides and visitors regularly pool money to pay for food and necessary care. If they want affection, they can choose from thousands of people each day, and if they want to be left alone, there are countless nooks in which to nestle.

If the floor mosaic and ash cast showed us a dog’s life in Pompeii’s past, and  the healthy-looking stray showed us the present, this dog, below, seemed to link the two.

He was lying quietly against a building, watching us with what seemed to be wise curiosity.  When we approached, he slowly stood, turned away, and meandered inside a dark building (an ancient public restroom), where he made himself at home and patiently ignored me while I took a photo. His thick coat was scruffy and damp from the weather and every movement was slow, but his bearing was dignified. His muzzle had a two-inch scar, barely visible in the photo on his right side. 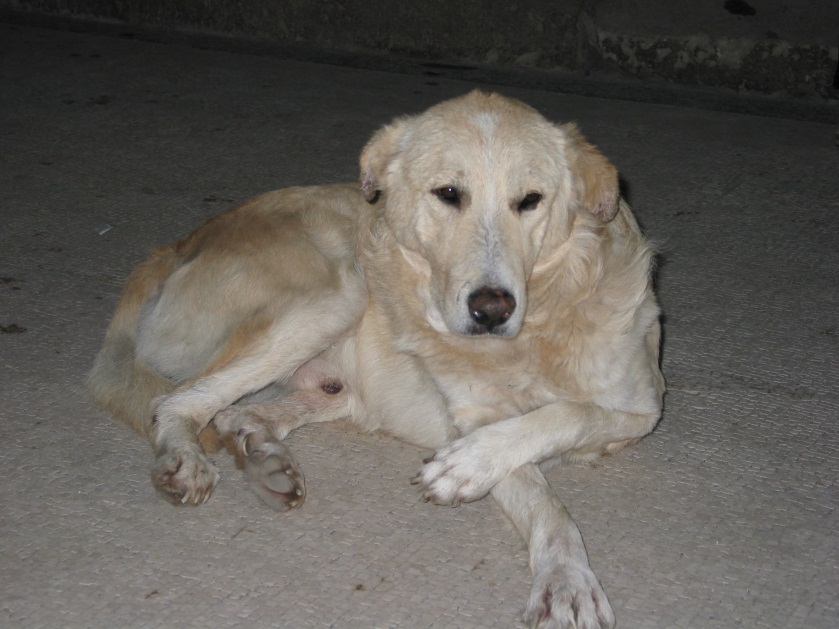 What troubled us most was that like unlike the dog in the mosaic and the one cast in ash, this one didn’t have a collar, and maybe not a name. Our first reaction was to reach out to him, literally and figuratively, to see if he needed comfort. Of course, being dog people, we immediately had thoughts of taking him home, but really, how does one get a dog from Pompeii to Spokane?

At first we felt like he looked detached from life, but after a time we realized he looked detached from what we thought his life should be. He looked like a creature that had seen the ash casts of people and dogs, and knew what they meant. He belonged to the silent streets and empty spaces, not to an earthly being. He carried himself as if the last dog of a culture that prided itself on its dogs, a society that values them so highly that they are part of the essence of the place.

When we left for the next house on our map, he followed us. When we stopped, he’d wait a moment, and if we dallied too long, he’d lay down. This went on for a half-dozen stops, until he made himself comfortable against a stone foundation, from where he watched us meander down an alley.

Turning around to have a last look, I felt very sad. Somehow, though, like the other dogs we’d seen, I felt as if he belonged to Pompeii, and I believe he felt the same way.

[Note: This article was written a few years ago. Next month we're re-visiting Pompeii, and I'll take more photos of that city's royal residents.]